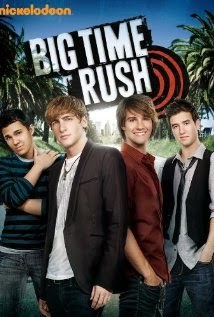 Four guys from Minnesota - Kendall, Logan, James and Carlos - get discovered at an audition by the music producer Gustavo and his assistant Kelly and get a chance to try to become a popular boy band in Palm Woods, Los Angeles. However, they have numerous obstacles before achieving their dream, from the annoying hotel manager Bitters up to eccentric CEO Griffin, and meet numerous people in the process, from the three Jennifers up to struggling actress Camille.

When the Beatles were introduced to the audience in the 60s, their managers had the idea to make a couple of films that could show their talent, like "A Hard Day's Night". Producer Scott Fellows had a more unusual idea: to introduce the new band Big Time Rush by making a children's TV comedy show about them. The notion is truly unorthodox at first, yet, surprisingly, it worked almost down to the T, which made "Big Time Rush" one of the best shows on Nickleodeon back in its time. When you have a sitcom that refuses to use the audience laugh track, you know it is just confident enough to show that it has something to offer. And indeed, this is a surprisingly fun, fresh and energetic show, featuring numerous irresistible jokes and fine performances by the four band members, especially Logan Henderson who stands out as the intelligent, but relaxed and cool member of the group. Remarkably, all the supporting characters are also equally as fun as the four protagonists: nobody is a 'face in the crowd', every little character has a specific "frequency" of humor and wit, from Camille (brilliant Erin Sanders) through Buddha Bob up to simply irresistible Bitters (brilliant David Anthony Higgins) and Kendall's little sister Katie (brilliant Ciara Bravo). Bitters and Katie always have their moments on their own, but when they team up, they are downright hilarious.

Naturally, not all episodes are equally as strong and one can sense the decline of level in the later seasons. However, at least four episodes are small jewels of comedy: "Big Time Sparks" has a hilarious and childish little subplot where Gustavo wants to get rid of a skunk in his studio by using a remote controlled toy car with a female skunk to attract it; "Big Time Live" is a 'tour-de-force' of inspiration by having the band try to shorten TV segments for a L.A. morning show in order to extract 4 minutes at the end and to perform on TV. This one really takes the cake by the staggering number of jokes, from the scene where they speed up the teleprompter and make the anchorman talk impossibly fast up to the moment where they remove the cook and replace his slow dish by a fast one; "Big Time Reality" is a great little spoof on reality shows; finally, "Big Time Pranks" is probably the best episode of all time, revolving around guys and girls in a "prank war" until the last one. There is a scene where Kendall and Jo are in a 'Mexican standoff' like scene, taking aim with water guns filled with milk, until the elevator door behind them opens and Bitters exits like a king, throwing randomly jam at them with a spoon in order to eliminate them both: this sequence is to kneel down from laughter. Wonderful jokes appear in other episodes as well (Bitters sleeps together with Big Time Rush. Suddenly a farting noise is heard. Bitters stand up and says: "Did you hear that? That was the ghost!"), but rarely reach the comic heights of these four. Despite a simplified presentation of young people trying to make it in show business, this is a more than a good of a show where the writers did not save their best jokes for some other film or series.