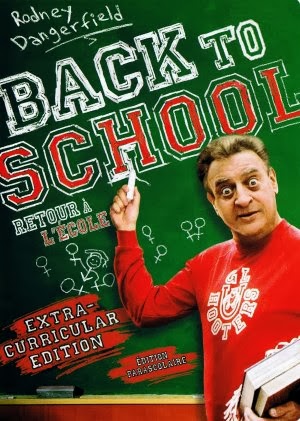 Thornton Melon, the rich owner of a store of clothes for large people, visits his son Jason at the campus. Upon hearing that Jason wants to quit the University, Melon, who never finished high school, decides to motivate him and show that it is not such an impossible task - by enlisting to the University himself! As the oldest freshman there, Melon is attracted to English teacher Diane, and hires professionals to write his dissertations for him. However, dean Phillip wants Melon to give an oral examination. Melon thus spends weeks studying for real, but manages to graduate.

Comedian Rodney Dangerfield appeared in only a handful of films - his performance on the screen, for instance, was restricted to only four films in the 80s - and thus it can be claimed that "Back to School" is his finest film by default. It is a light, yet accessible comedy that builds its appeal on the charming idea that the main protagonist, Melon, in his 50s, decides to share his son's burden of going to University by enlisting there himself, which has enough good moments to carry the film. The jokes are on the hit-or-miss level, yet the best ones manage to ignite sufficient chuckles, where the assistance of co-writer Harold Ramis and Dangerfield's fast wisecracking monologues come to full expression ("You have poor taste!" - "I know, I married you!"; "Your friend, Lou, looks strange." - "Lou? He's an animal! He is only the second generation in his family that walks upstraight!"; the Kurt Vonnegut cameo). Dean Phillip is a one-dimensional bad guy, Robert Downey, Jr.'s role is underused and the love subplot involving Jason and Vanessa is bland, yet thanks to the rather positive tone of the storyline and the tendency to avoid vulgar or cheap jokes resulted in a an overall amusing little film.