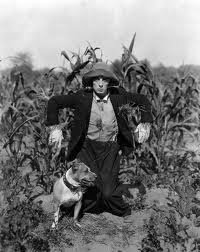 Two farmer assistants, Buster and Joe, are living inside a very small house with only one room. They are in love with the daughter of the main farmer. Joe admits his love first, while a dog eats some cream and chases after Buster, who thinks the dog is rabid due to its cream on the jaw. Loosing his clothes in the chase, Buster takes the clothes of a scarecrow. He runs away with the farmer's daughter on a motorcycle and they are wed when they pick up a priest.

"Scarecrow" is a sketchy comedy with a vague plot, and not enough of a payoff compared to Buster Keaton's best films, but is still a very fun short film. The main lack in the story is the lack of a cohesive whole, evident in the very elaborated and meticulous breakfast sequence (salt and pepper grinders, ketchup and other spices are hanging tied to strings above the two protagonists, who just have to pick them "down"), but a one that lacks a point or a definite punchline, since a hanging salt pepper is not that much of a useful invention. Had they established that Buster and Joe are constantly misplacing or losing stuff in the house, such a string would have had a point in the story. The film should be enjoyed for its simple jokes that arrive swiftly and are great little fun: the dog "climbing" a ladder; for instance, or a scene where a character does not want to get his shoes wet, so he crosses a river by walking on his hands! The most charming jokes are so innocent it melts you away, such as the one where Buster "improvises" by giving his girlfriend a cog instead of a engagement ring.