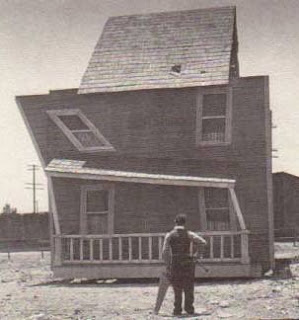 Buster and Sybil are married and get a special wedding present: parts for a build-it-yourself house. However, a jealous man who wanted Sybil for himself, deliberately meddles with their instruction kit, which results in an "athwart" house. Buster nevertheless tries to make as best of a home as he can. When they have to relocate, Buster puts barrels under the house and moves it with a car, but it gets destroyed when a train collides with it.

Along with "Sherlock, Jr.", "One Week" is probably Buster Keaton's best short film, a shining comedy. Keaton somehow hits the vibe of inspiration the most when he includes some spectacular object to play with or destruction on a large scale - such was the case with the epic tornado sequence in "Steamboat Bill, Jr." and the epic train chase in "The General" - as is the case here, where a whole housing unit is a part of the joke, used often to full potentials (brilliant - and magnificent - jokes where a strong wind spins the whole house around its axis, and makes the people inside feel like in a merry-go-round; the "abstract" design of the house, almost reminiscent of "jagged" buildings in the expressionistic "The Cabinet of Dr. Caligari"), though here even "smaller", humble everyday jokes manage to ignite all the way to the top (the scene where Keaton hits a police officer, takes his hat and uses it to stop the traffic, i.e. the car in which his bride was kidnapped, and then return the hat to the officer is among the pinnacle of cool). Filled with meticulous details, a strong pace, charm and an elegant style, "One Week" truly is among the greatest short films ever made and offers Keaton in a very cool edition.