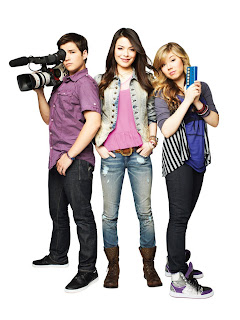 While having to film a casting for new talents for their school, two teenage girls hosting the event, Carly and Sam, start making wisecrack jokes about the candidates. Their cameraman and classmate, Freddie, finds them so much funnier and more interesting than the candidates that he uploads a small clip of them on the Internet. Carly and Sam are at first outraged, but once the fan mail starts to pile up, they decide to make their own web comedy show, "iCarly", in their basement while Freddie would film them. Quickly, the web shows gains fame and they are aided occasionally by Gibby and Carly's older brother Spencer.

"Wayne's World" with teenage girls - "iCarly" may have picked up some traits of the above mentioned film, yet also picked up its contagiously fun, shrill and positive vibe, just presenting it in a more harmless edition here to align itself with the family friendly Nickelodeon network standards. As with most movies and TV shows, a large part of the storyline relies on the charisma and talent of its main protagonist, and Miranda Cosgrove and Jennnette McCurdy truly carry the show thanks to their relaxed charm and wit, whereas the show's creator and producer Dan Schneider allows for a care-free fun, though with a few 'rough' edges here and there (in the later seasons, for instance, too much of the show degenerated only into empty vessels of Sam being mean to Freddie or Spencer doing wacky things that aren't funny). This may be a kids' show, but some jokes truly are very funny (the hilarious slow-motion scene of Carly's and Sam's lips while making the horse neigh noise; Freddie showing up all excited and saying: "You know who just contacted us? Kevin Colt!", upon which Sam replies in an equally "excited" language: "Kevin Colt?! *The* Kevin Colt I never heard of?!"; Carly jokingly rotating while sitting on a rotating chair, but when she stands up she is dizzy and almost falls to the ground) whereas at least one episode, the one where Sam and Carly travel to Hollywood to confront lazy writers of a TV comedy show that constantly steals their jokes from "iCarly" but say they cannot do anything about it, is an example of comedy gold that could qualify for the World Heritage Site. For a long time, the viewers may wish for Carly to show another layer or extension of her character, another feature of her persona, but she remained only defined by one feature solely, a simple funny girl, not that it is necessarily a bad thing. Overall, a good and fun show that demonstrated how the most childish storylines can be plausible. And one supporting character almost eclipsed the heroine near the end of the show - "Gibeeeeh".