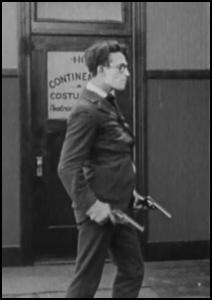 Harold is in love with a girl and wants to propose her, but first has to ask her father's permission. Unfortunately, her father is a very busy boss who has so much work that people regularly wait for weeks just get an appointment with him. Harold does not want to wait so long and tries to take a short cut through the office and pass dozen of receptionists. When he does get a chance to talk to the boss, it turns out his girl already married someone else. Still, he finds a new girlfriend, the secretary.

One of many silent comedy shorts featuring the legendary comedian Harold Lloyd, "Ask Father" has a running time of only 13 minutes, but it doesn't seem like every minute counts in the storyline: for such a sparse amount of time, even a minute of empty walk is noticeable. The variations of the hero trying to talk to the busy boss to ask his permission to marry his daughter have charm, but its sharpness is not always top-notch. Still, as a simple fun and example of 'good old school' filmmaking, "Ask Father" works. Also, one stand-out highlight simply must be mentioned, since it is among one of top three, if not even the best best joke Harold Lloyd ever made in his career: when he descends down the street, he stands holding two pistols behind his back - not realizing that two burglars are behind him and, seeing two guns, raise their hands. Harold turns left - the burglars turn left - Harold turns right - the burglars turn right - and then, not spotting anyone, he just walks away still holding the pistols behind his back, and the burglars follow him, because they think they are "captured".