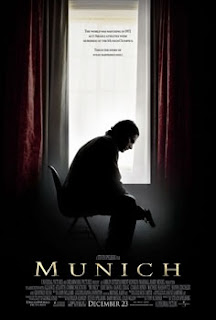 Munich, '72, during the Olympic games. A group of Palestinian terrorists storm the residence of the athletes at night and take 11 Israelis as hostages. In the ensuing chaos, both die. In order to punish the perpetrators, the Black September group, Israel's Mossad assembles a group of paramilitary agents, led by Avner, whose task is to find and kill the 11 Palestinians allegedly involved in the massacre. The first target is an ageing poet in Rome, so the team kills him hesitantly. After him, they kill Palestinians in Paris, Cyprus... However, when the team becomes a target of unknown assassins themselves, Avner starts feeling repulsion towards further violence. He quits and returns to his wife and child in Brooklyn.

Drama "Munich", nominated for several awards, is a very thought-provoking essay that forces the viewers to think, and possibly an intimate film by Steven Spielberg, whose dark phase in his career started with "Schindler's List" and - indicatively - ended 2005 with this film. The taboo - and very delicate - topic of the Israeli-Palestinian conflict was handled here by screenwriters Eric Roth and Tony Kushner by mirroring it representitavely through the '72 Munich massacre and its aftermath: in the first 10 minutes, Spielberg shows the awful, shocking way Palestinian terrorists killed peaceful Israeli athletes, but for the remainder of the film flips the perspective and actually shows Israeli agents killing several Palestinians across Europe, in order to emphasize the tragic message where violence is not enough of a solution anymore and new ways and approaches must be sought. Violence results in more violence, and its endless repeat gives the story a "Groundhog Day" like dimension where something is crying for a change. The moment where the two team members find the aging poet Zwaeter but are hesitant to shoot him because he appears harmless is incredibly strong and cannot leave an indifferent impression, whereas the phone-bomb-in-Paris sequence reaches almost Hitchcockian intensity of suspense. A few 'rough' edges appear here and there, though, such as the pretentious sequence where Avner's sex is inter-cut with the Munich massacre scenes, a few clumsy attempts at humor and a slightly overstretched running time. However, overall, "Munich" is a strong film that dared to take on such a difficult topic and start a debate.