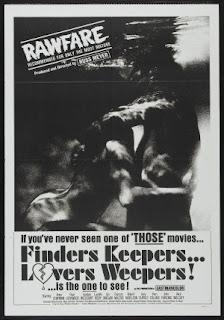 Paul is the owner of a strip club bar. The madam of a brothel phones him and invites him to have sex with a new girl, but there he is knocked unconscious. Paul is dragged to his home where he has an argument with his wife Kelley. Angry, Kelley decides to strip in his bar out of spite, thereby attracting the attention of bartender Ray. However, while they are out, two burglars break into the club in order to rob the safe. When Kelley, Ray and Paul return to the bar, the burglars tie them up and threaten to rape Kelley if Paul does not tell them the combination of the safe. In the fight, Ray, the madam and the two burglars are killed.

This watchable movie is another example of Russ Meyer's formula for a successful film with a low budget, namely large breasts and a hard crime story that sets in near the end to add some edge and danger for the idyllic love couple, but once again, the latter seems unnecessarily violent and exploits too many cheap cliches. Meyer can be original and engaging just through charm, noticeable in the inventive opening act where the opening credits are displayed without titles, just with the billing of the crew printed on bottles in the night club sequence, or the always wonderful use of Sergei Rachmaninoff's music, yet the rest seems just like hastily patched up semi-story that was salvaged from several other scripts and released just to earn a few fast bucks. For instance, the long conversation between Paul and the prostitute, an ex-Amish, has only truly one great line ("I soon found out that sex is better than religion."), Kelley's affair with Ray is bland whereas the heist finale is backward and low. As attractive as Anne Chapman is, her role is reverse proportionally to anything else her underwritten character has to show, either through charm, humor, wit or brains. And indeed, there is simply too little for any of the characters to show, they are all too passive to be anything.