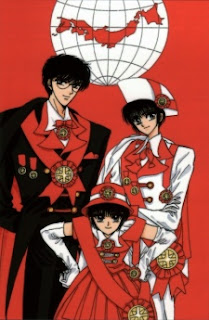 Tokyo. Subaru is a psychic who is sometimes called by the police to solve unexplainable, occult incidents. He has a twin sister, Hokuto, who is in a relationship with veterinary Seishiro. Subaru is called to investigate an allegedly cursed site where a building is built, and where workers died mysteriously. He finds out a woman wants an occult man cursed, who killed her brother and boss in order to become the new director of a company. In a showdown, Seishiro kills the man... Subaru witnesses a murder while travelling in a subway and meets Mirei, a post-cognitive woman - a person who can see the past, not the future, and thus can identify the killer. The killer attacks her in the sever, but Subaru and Seishiro stop and kill him.

This two episode OVA is a stylish and aesthetic crime detective fantasy, but many point out that Clamp's original manga was far superior. Truly, as an anime, "Tokyo Babylon" is nothing special, a fairly well done, but standard adaptation of an interesting concept with underdeveloped characters - it may come as a surprise that the 2nd main protagonist is listed a Subaru's sister Hokuto, which is indeed de iure true, but in reality, her appearance is so pale and bland that she seems more like an extra - and a few lame attempts at humor - for instance, when Seishiro tells Hokuto that she should "lose some weight", even though she looks unsettlingly thin. The identical character design of Subaru and his sister Hokuto is slightly misplaced: true, they are twins, but a brother would look identical to his twin sister only if both of their parents were identical too, and thus here he ended up too andogynous. The first episode, revolving around a cursed construction site, is solid, though thin, but the second episode, revolving around Mirei, a 'post-cognitive' woman who must find the killer of her psychic mother, is slightly more intriguing, except that the final showdown is rather 'anti-climatic'. Overall, "Tokyo Babylon" is not versatile, but is an appropriate and good two part anime, nonetheless.