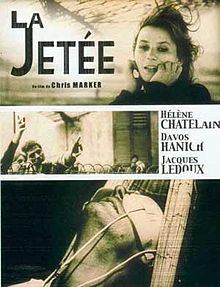 A child at an airport witnesses a scene he will never forget: a man dies in front of a beautiful blond woman. A few years later, World War III breaks out and Paris is destroyed. The child, now grown into a man, is persuaded to join a time travelling experiment, to be sent to the past in order to get food and energy for the surviving people living underground. He is sent to the past and notices the blond woman he remembered from his childhood. The two become friends and lovers. He is sent to the far future, where the utopian people offer him sanctuary and an energy source. The man chooses to be sent to live in the past. He meets the blond woman at the airport, but is killed by one of the agents who have terminated the experiment. The death that was haunting him from the childhood - was his own.

Chris Marker's unusual "photo-novel" short (assembled entirely out of stills - except for one brief scene some 18 minutes into the film where the woman is lying in bed and suddenly blinks, which somehow gives the moment a special touch that automatically stands out from the rest, giving her "life"), science-fiction movie "La jetee" entered the anthology of movie experiments and is often cited as one of the classics of the 60s, especially after the re-newed interest was sparked with Gilliam's remake "12 Monkeys". The comparison between the two films is difficult: Marker has a sixth sense for a dreamy mood and a melancholic touch, but, as it is often the case with French art-movies, he is not able to tell the story in normal, simple terms, instead choosing to "cocoon" it to such an extent that it seems almost like hermetic anti-narration at times; as opposed, Gilliam just copy-pastes the storyline - and the legendary plot twist - and presents it in a dark, dirty manner, but is able to tell the story much clearer, enabling the audience access to it. Marker shows a few neat little details (the famous Arc de Triomphe "cut" half after Paris is destroyed) and plays with philosophy, psychoanalysis and repressed memory, all adding to an opulent 27 minutes short that is equally challenging today. However, even though it fits into its 'claustrophobic' mood, the 'claustrophobic' music is indeed awful, showing that not every mean of expression is suitable to attract the attention of the viewers.