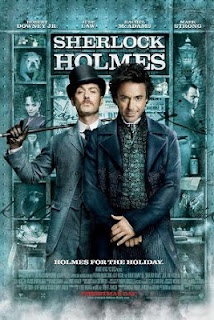 London, 19th century. Detective Sherlock Holmes and his sidekick Dr. Watson manage to stop a ritual sacrifice of a woman and arrest Lord Blackwood, who practiced the occult serial murders. Blackwood is sentenced and hanged, but a few days later people report he rose from the dead and is alive again. Holmes is also contacted by Irene Adler, who asks him to find a missing man. After new murders appear, Holmes and Watson discover that Blackwood is a charlatan who uses elaborate tricks to give an illusion of occult powers, and bribed police officers to fake his execution. Blackwood wants to poison the members of the Parliament, but Holmes and Watson stop that. Blackwood ultimately slips and accidentally hangs himself on a chain, while Irene is arrested.

In one "Simpsons" episode, "Stark Raving Dad", the oblivious Homer phones Bart and informs him that he is bringing a friend, Michael Jackson, home. Cue to thousands of people and music fans eagerly awaiting Michael Jackson visiting their hometown, just to find out that the person in question is actually a bald, overweight white man. "Are you Michael Jackson?" - "Yes." - "You sure don't look like him." The same could be said about Guy Ritchie's Sherlock Holmes: he has the same name as Arthur Conan Doyle's iconic detective, but sure doesn't sound or look like him. A part of the critics loved precisely that, namely that Ritchie took one classic character and gave him a completely new, fresh treatment, never seen before, yet the bizarre blend of 21st century 'hip' action cloth and 19th century classic narration simply ended up uneven. Overall, "Sherlock Holmes" has only two cool scenes (one is the sly way Holmes electrocutes a giant Frenchmen, catapulting him into another thug and thus saving Dr. Watson) and a very fitting finale, yet otherwise its story flow is artificial, the occult subplot is ephemera while it is sometimes sad to see how Holmes turned practically into a slob in this edition, while here Dr. Watson is practically annoyed by the guy. The actors are all great, though, from Downey, Jr. up to McAdams, and even Jude Law turned out much better as Dr. Watson than his initial strange casting might have suspected. However, the movie is still just a typical example of pompous effects and hype camouflaging a thin story, since "Holmes" is not even half as fun as Ritchie's great humorous crime flick "Snatch" or Wilder's similar "The Private Life of Sherlock Holmes" that also showed the detective in an untypical edition, but still managed to turn out much more circled out, even though the producers (in)famously cut it by an hour.