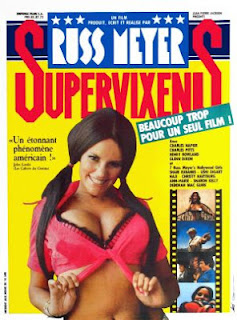 California. Clint works at a gas station, owned by a certain Martin Bormann, and is often annoyed by his spoiled girlfriend SuperAngel. During a heated argument, Harry, a police officer, mistakenly assumes Clint threatens her, so he knocks him unconscious. Harry wants to have sex with SuperAngel, but quickly learns that only Clint could handle her irritating behavior, so he kills her. Since he is the main suspect, Clint flees, but wherever he goes, busty women want to sleep with him, which makes him the target of revenge of their husbands or fathers. Finally, he meets Supervixen and falls in love with her. Harry finds them and wants to kill them, but dies by his own dynamite.

"Supervixens" - one of the last three films which showed the most of nudity directed by Russ Meyer, "the king of big breasts" who somehow found some of the most unbelievable women to ever grace the big screens - is a trashy and incoherent mess of a film that works far better as an erotic comedy than as a crime flick whose 'dumbed down' violence is again repulsive (and Charles Napier is awful as the bad guy, especially since his actions make little to no sense), as if he is both fascinated by these women but hates them at the same time (maybe because they are unobtainable?). When one watches the story, one really gets the feeling where "Tenchi Muyo" and "Golden Boy" got all their ideas of a 'poor guy' constantly 'harassed' by busty women, yet Meyer wastes it just by creating a wacky world of his own without any coherence, meaning or a point - the only exception is when he tries to add a little humor, such as the best episode, the one on the farm when he shows an ironic sequence of Clint working there while the farmer and his young wife are naked and chasing each other in the background. The story would have been better if it focused just on pure erotic adventures, maybe it could have even been a good love story, yet some viewers even today pardon Meyer for his bizarre escapades for the sheer fact that he rallied so many beautiful women in his films who almost seem as if they came from a male fantasy, especially Uschi Digard and Christy Hartburg.