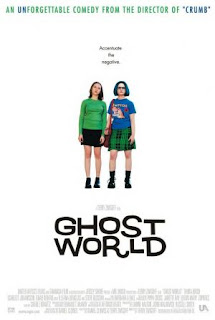 An Indian musical is playing on television. Enid and Rebbecca, two rebellious teenage girls, graduate from high school but don't know what to do with their lives. Enid who lives alone with her father, is cynical and mocks everyone together with Rebbecca, sometimes even their own friend Josh who works at a local store. As a joke, Enid responds to a love ad written by the lonely Seymour, but later on feels sorry for him when he shows up for a fake date. She meets him. He is a polite collector of old records, but when really has a date, she becomes jealous. After Enid has a one-night stand with him, she runs away, but later shows up again and apologizes. Rebbecca finds a job and an apartment while Enid enters an unknown bus.

"Ghost World" handles the stimulative theme of smart and cynical teenagers, managing to execute it competently, though to a some degree one could complain that at moments it's directed in a clumsy way, with too much episodic characters without a point and a too sustained tone. Thora Birch delivers a top notch performance as Enid, the heroine with glasses who at some moment seems remarkably similar to the heroine from the legendary show "Daria" - there's even a scene where Enid makes a caricature during art class where she shows the teacher murdered (Jane and Daria also made something similar), says biting lines when she serves the drinks to her customers in a store ("Enjoy your chemicals"), jokes around when she and Rebbecca don't find Josh at his apartment so they leave a written message at his doorstep ("We wanted to sleep with you, but you weren't there") and so on and on, but the main stand out thing that makes this film so different from it is the main tangle where she responds to a personal love ad as a joke, but actually falls in love with the lonely guy who shows up, Seymour (excellent antipode Steve Buscemi). The Enid-Seymour relationship is developed by Terry Zwigof refreshingly calm, almost sophisticated, with time that forces the viewers to explore them more emotionally than humorously. The two characters have some smashing chemistry - you have to get used to it, but it's amazing to watch them interact, to make even the most normal, ordinary moment somehow special. "Daria" was better, but as some sort of an alternative "Daria", "Ghost World" is in minority a strange, but in majority an amazing film about outsiders (with an especially amusing scene after the end credits, where Seymour actually wins in a "fight" with someone).