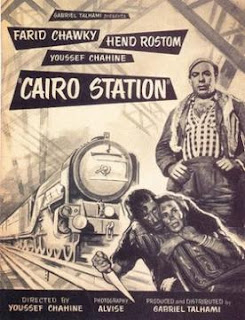 Cairo. Qinawi is a newspaper-seller who cannot find a woman because of his low salary and one limp foot, and thus lives alone in a shed. He is secretly in love with Hanuma, a woman who illegally sells cold drinks by climbing into trains and offering drinks to the passangers arriving at the station, though she and her friends have to be quick to escape as to not get caught by the police. She is suppose to get married to Abu Siri, an employee at the station who is protesting against the harsh working conditions of his boss and thus tries to form a union. When she rejects him once again, Qinawi decides to stab Hanuma. However, because it was night, he accidentally stabbed another woman and placed her in a trunk. The woman survives and informs the police who arrest Qinawi before he can stab Hanumi at the railroad. He is sent to a mental asylum.

Widely considered one of the greatest movies of Egyptian cinema, "Cairo Station" by its director (and main actor) Youssef Chahine is a dark, disenchanting and bitter tale on the old archetype of all drama: the everlasting tragedy/suffering caused by the rift between what people want from life and what life actually gives them. This variation has the main protagonist suffer from loneliness because he is a cripple, and the lack of any sympathy or understanding from women around him lead to inevitable tragic consequences. Chahine is surprisingly daring in some scenes: the opening has Madbouli enter Qinawi's shed, and spots that it is plastered with newspaper clips of scantly dressed women, a situation neatly summed up by Madbouli's narration: "That's when I realized how frustrated he was, so frustrated that he became more and more obsessed". Inspired somewhat by Italian neoralism, "Cairo Station" strives towards naturalism without any idealism, showing the sorry state of human existence—true to the ulterior theme of desire as a trap for people—yet despite its simple approach, it has a strong style: close-up shots are used effectively (one expressionistic sequence zooms in on Qinawi's eyes as he observes, it is implied, sex between the "object of his affection", Hanuma and Abu Siri, in a warehouse, while his look is intercut with frames of a train slowly passing over the railroad tracks, pressing it up and down) whereas a couple of "cinematic codifications" are surprisingly well done (in one sequence, Madbouli reads a newspaper article about a woman who was killed, her head cut off, while Qinawi suddenly leaves the room, leaving behind a small paper photo of a woman whose head he "cut off" with scissors). Chahine has a sense for a simple movie language in the storyline, delivering a film that does not accuse anyone yet causes everyone to think, whereas his actors are wonderful, from Hind Rostom as Hanuma up to the excellent Farid Shawqi, one of the most underrated Egyptian actors.