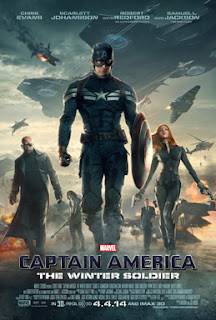 Steve Rogers, aka Captain America, now works for the espionage agency S.H.I.E.L.D. led by Nick Fury. Upon finding out he cannot access some of the data on his computer, and reporting it to senior S.H.I.E.L.D. official Pierce, Fury is wounded in an assassination attempt. In a surgery, he is pronounced dead. Rogers and Natasha Romanoff start to investigate and find a bunker with a secret supercomputer holding the digital memory of Arnim Zola, who reveals to them that the underground organization Hydra infiltrated agents into S.H.I.E.L.D. and persuades a new plan of a global totalitarian dictatorship: since the people resisted it in World War II, now Hydra wants to saw chaos and crisis in the world, persuading people to accept security at the expense of freedom. Fury reveals he has feigned his death and joins with others to stop Pierce, who is a Hydra agent and wants to send Helicarriers into orbit which will kill millions of people around the world, who are a threat to Hydra's plans. Fury, Natasha and the others stop that, whereas Rogers recognizes the assassin Winter Soldier as Buck Barnes, who underwent experimentation during WWII.

Despite a few good moments and some admirable efforts to make Marvel's superhero film franchise a tad more mature, "Captain America: The Winter Soldier" is basically a light cartoon version of "Three Days of the Condor", abandoning thought provoking questions for simplistic, fast action. The Marvel Cinematic Universe already became a too established franchise for any director or author to try out something truly unique, daring, risky or innovative which would stray away from the entrenched routine, though it was certainly an interesting choice by screenwriters Christopher Markus and Stephen McFeely to try to make a homage to 70s paranoia thrillers: one of the highlights is certainly the sequence where Natasha and Steve Rogers discover the secret bunker, where the computer programme tells them about the secret plan of the Hydra organization to saw chaos and conflicts around the world in order to try to persuade people to voluntarily give away their freedom in exchange for security, even pointing out how "people resisted and fought for their freedom during World War II", and now this new approach is taken. This is indeed a scary and frightening concept, with allusions to the time from when the movie was made, yet it is left surprisingly underdeveloped and scarce.

How were these crisis instigated throughout the world? What is the motivation of the Hydra agents in S.H.I.E.L.D. to proceed with it? What is their ideology? How far would they go? All these and many other interesting questions are left rather unanswered, and instead the story only relies on endless action, which isn't that great, anyway: the sheer amount of explosions does not equal inspiration. When Nick Fury seemingly dies from the assassination, this gives the film weight and credibility — and thus when it turns out he is alive later on, this seems like a cop-out which simply doesn't dare to try out something different from the safe terrain. The characters always encounter ostensibly hopeless situations, but they always survive, anyway, since sequels have to be made with them. Certainly, this stale formula could have worked with a tad more style, fun and ingenuity, yet they are absent as well. Still, having Robert Redford play the opposite role of himself in "Condor" is effective and gives for an refreshing casting. There is also a pivotal sequence somewhere in the first third: Natasha kisses Steve in public on the escalator to try to hide from agents looking for them. Later on, in the car, Natasha asks Steve this: "Alright, I have a question for you, of which you do not have to answer. I feel like if you don't answer it though, you're kind of answering it." - "What?" - "Was that your first kiss since '45?" This is when Natasha and Steve transform from one-dimensional sketches into genuine characters for a moment, and it is so charming because the viewers get the impression that there is more to them than just running and punching villains around. If there were more of such moments of them interacting like humorous people, like grown ups, this might have actually been a fun franchise.