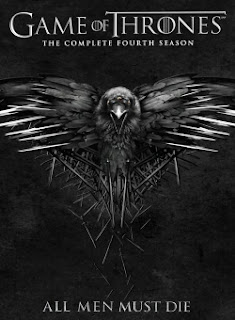 The fight for the legacy of the Seven Kingdoms continues. At King's Landing, Prince Oberyn and many other guests are summoned to attend the wedding of King Joffrey and Margaery Tyrell. However, King Joffrey is poisoned after drinking vine, and Cersei and Tywin Lannister put the blame on Tyrion. A show trial is set up, with even Shae giving false testimony against him. Trying to prove his innocence, Tyrion wants a combat, and Oberyn accepts to battle for him, but gets killed by Gregor. However, Jamie Lannister helps Tyrion escape before the execution - before he escapes, Tyrion kills Shae and Tywin... Daenerys and her army manage to conquer another city and release the slaves there, but her three dragons keep acting more and more erratic. It also turns out that her associate Jorah has been sending information about her to King's Landing... In the North, Brandon Stark and his associates finally manage to find the mysterious Heart Tree from his vision, where they meet an old man who disguised himself as the 3-eyed raven... When Brienne kills the "Hound", Arya Stark is left alone and boards a ship...Ramsay still tortures Theon Greyjoy... Jon Snow leads the successful defence of the Wall from the wildings, but his beloved Ygritte dies.

The 4th season of the popular alternate history series "Game of Thrones" made a few improvements compared to the flaws of the previous two seasons, notably by toning the cruelty a little bit down, yet the problems of the bigger picture in it still remain, especially the ones aimed at how long George R. R. Martin can overstretch all these storylines and add new ones until it all collapses on itself from excess or the viewers' oversaturation with whom of the characters wants to battle whom. This season still works, but the cracks are appearing, and either they will be addressed in the next seasons, or it will all go downhill from here. One of the disappointing elements is the resolution of Tyrion's love relationship with Shae, which does not serve him or her justice, whereas Tywin's end is too similar to Vincent Vega's end in "Pulp Fiction". However, episodes 4.1, 4.2, 4.6, 4.9 and 4.10 are all great, staying true to several completely unexpected plot twists and giving at least three evil characters their just judgement, evidently also featuring better writing of dialogues: in episode 4.1, for instance, there is a clever exchange (Allister: "You always know when a man is telling a lie. How did you acquire this magical power?" - Maester Aemon: "...I grew up in King's Landing...") whereas the writers had a field day in Oberyn's comical jabs aimed at Cersei ("Wearing the crown for so many years must have left your neck a bit crooked").

The tension on the wedding in episode 4.2 grows so steadily until it becomes almost palpable, whereas the episode ends in such a delicious and satisfying plot twist that it would be a sin to even mention it to those who haven't seen it, since it must not be spoiled. The critics rightfully praised the stand-out episode 4.9, that untypically focused only on one single storyline, the siege of Wall by the wildings, featuring a few spectacular moments (the defence releases a giant scythe that swings and simply decimates the besieging forces that were climbing on the giant wall) and suspenseful action sequences (the giant and the mammoth pulling the gates in order to open them). The trial sequence in episode 4.6 is also a highlight, especially when the accused, Tyrion, simply addresses the crowd and shouts: "I am on trial for being a dwarf my entire life!", whereas Cersei proves to be a far more complex character thanks to her defiance to Tywin who wants to force her into an arranged marriage (in one scene, she interrupts him in the middle of his stories where he once again got everything his way:"I’m not interested in hearing another one of your smug stories about the time you won. This isn’t going to be one of those times."). The most aesthetically pleasant and almost esoteric moment arrives when Brandon and his crew reach the mysterious Heart Tree that glows in the snow – it is a pity so little of its purpose is revealed in this season, but the sight of it is so magical it almost reminds of a paranormal event. The best moments arrive when some seemingly separate stories and characters encounter, unite and complete each other, yet parts of this "hyper-narrative" still remain questionable for spending so much of the viewers' time and do not always justify its existence.