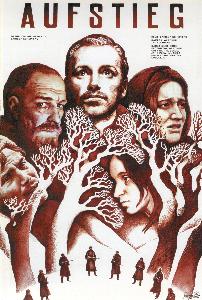 Belarus during World War II. It is winter, and partisans Sotnikov and Kolya search for food. They enter a house of a religious man who tolerates the Nazi regime and take away a sheep from his farm. On their way, they are attacked by a Nazi unit. Fleeing, they hide in a house of a mother with three children. However, the Nazi soldiers find and arrest them together with the woman. In a nearby army camp, Sotnikov is interrogated and tortured by Portnov, a former choirmaster who is now an Axis collaborator. He tells nothing, and is therefore sentenced to death with others by hanging, while Kolya saves himself by telling everything and becoming an Axis collaborator.

Larisa Shepitko's final film, "The Ascent" is a bitter and depressive World War II drama that refuses to yield to the cliches of its genre, and thus instead of showing a picture-perfect propaganda story about glorious soldiers, actually shows that war is unglamourous, dirty, vile and humiliating - which may explain why the Soviet censors lashed out against it. The whole film is basically a story about the protagonist Sotnikov dying - from the opening act when he is wounded, through the torture sequence where the Axis soldiers put a burning star-shaped iron on his chest up to his acceptance of death through the dialogue with his fellow inmate in jail, Kolya ("I want to live! I'm a soldier and you are a dead man!" - "Then go on living without conscience...") - as well as an essay and contemplation about two kinds of people: those who would die with integrity (Sotnikov) and those who would sell their soul and betray anyone just to ensure their own survival (Kolya). The film works thanks to a few great little moments (the sequence where the Axis soldiers are searching the house, presented only from Sotnikov's and Kolya's perspective, who are hiding on the attic; the prolonged sequence of the four people marching to the gallows on a hill), but it suffers from a too slow pace at times, a one that moves on way too sluggishly as the film progresses, especially in the overlong finale with too many scenes of characters just staring into the camera for minutes, which together with a rather too simple storyline, somewhat undermines its overall impression.