Guardians of the Galaxy 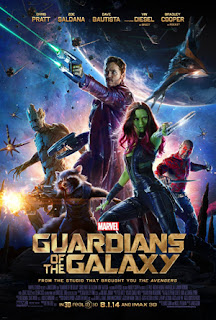 In '88, a boy named Peter is taken by an alien spaceship of space pirates led by Yondu. Years later, Peter travels across planets and finds a mysterious orb. He is arrested together with bounty hunters Groot, a humanoid tree, and Rocket, a humanoid raccoon, as well as alien woman Gamora, and sent to a space prison. They escape together with Drax and figure that Peter's orb is wanted by alien dictator Ronan, who wants to use its energy to rule the Universe and destroy planets. Ronan obtains the orb, but just as he is about to commit a global Holodomor against planet Xandar, he is stopped by Peter, Rocket, Groot, Drax and Gamora. The five are pardoned for their crimes and take on the name 'Guardians of the Galaxy'.

So many big budget Hollywood films get intimidated by the high costs of their own production, and thus become petrified and stiff from this realization, which inhibits their creative spirit - yet James Gunn's "Guardians of the Galaxy" is one of the rare positive exceptions of that rule, since it is refreshingly relaxed and simply just plain fun - so much fun in fact, you may get the impression that the authors filmed the actors in their cozy back yard for a nickle. Certainly, it is a superhero film of the Marvel franchise, yet few of their adaptations contained such a contagiously positive energy and wit, unlike some other films whose viewing seemed more like homework for Marvel fans. The characters are irresistibly conjured up, and have much more layers to them than your 'run-of-the-mill' superhero: even the seemingly one-dimensional humanoid tree Groot proves to have a far more sympathetic personality than expected in the end.

The opening act starts almost as some sort of a melodrama: a kid, Peter, witnesses how his sick mother dies in the hospital, runs away - and then gets abducted by a spaceship! This is a testimony to the narrative with enough twists to get away with it, even though it does become slave to the standard action sequences and explosions here and there. However, the comic lines are a delicious treat, whether they come from Earthling Peter ("I always keep my promises, when the're to muscle-bound whack jobs who will kill me if I don't") the dense muscle-bound Dorax ("His people are completely literal, metaphors will go right over his head." - "Nothing goes over my head! My reflexes are fast! I will catch it!") or the raccoon Rocket's 'deciphering' of Groot's lines, who can only say "I am Groot!", which mimics and spoofs Han Solo's "communication" with Chwebacca, who can only howl. One of the highlights is definitely Peter's plan which clashes with Rocket ("I have 12% of a plan!" - "12%" (laughs) - "That's a fake laugh..." - "That's the most real, authentic, hysterical laugh of my entire life because that is not a plan!"), though there are also enough other moments with irony and charm, which help elevate "Guardians..." above the mass of the other films of that genre.