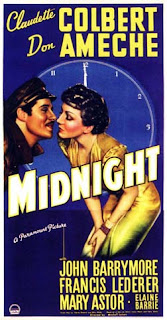 Eve, a broke American showgirl, arrives to Paris and spends the night searching for a job thanks to a friendly taxi driver, Tibor Czerny, who decided to drive her for free. Eve manages to smuggle into a noble party by pretending to be Baroness Czerny. There, she catches the attention of playboy Jacques. The next morning, she finds herself in a fancy hotel, where the wealthy Georges admits he has seen through her charade, but that he is willing to pay her to seduce Jacques - away from Helene, George's wife, who seems to be attracted to Jacques. At a new party, Tibor shows up, pretending to be count Czerny in order to win Eve from Jacques. This ends with a lot of misunderstanding, where Eve and Tibor go to a court to demand a divorce, even though they never were married - and subsequently decide to get married.

A charming modern retelling of "Cinderella", "Midnight" is a good "screwball" comedy, but still one of the 'lighter' films from the "Golden age of Hollywood", not quite strong enough for the status of a classic. Its strongest points are the opening 15 minutes, equipped with fantastic, inspired dialogues, where the writing by screenwriters Charles Brackett and Billy Wilder show their full potential: one of the best moments is when Tibor offers Eve a taxi ride while it is raining outside, but she explains to him that she doesn't have anything in her purse, except for a penny with a hole in it, or when she observes the wet newspaper ("I don't know if I should read it or drink from it"). Bizarrely, the minute Eve enters a party, it seems she fell into a different film, a one where the mood is still sustained, but only at half-speed and half-effort of the previously established and polished intro, since the spark of the storyline does not manage to ignite to the fullest. The masquerade and impersonation tricks become a tad too contrived after a while, though they get to a few good moments, such as when Tibor disguises himself as count Czerny in order to unmask that Eve is not countess Czerny, but she just manages to persuade all the guests that he is actually an impostor, not her. The ending left a fair deal of the story unfinished, but gave a worthy conclusion where just enough was said in a satisfying manner to get the bigger picture. This may be slightly dated today, but at least it is nobly dated.