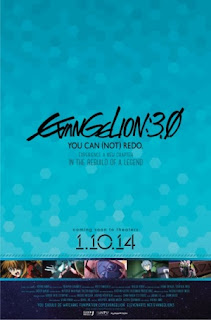 14 years after the last events. Asuka and Mari use their Evangelion bio-mechanical robots to get Shinji Ikari sealed away in the Earth's orbit. Shinji is arrested and taken to the headquarters of WILLE, a new organization led by Misato, who is now on a quest to destroy NERV and Evangelions. It turns out that Shinji's awakening of Evangelion caused Third Impact and inflicted heavy losses on Earth. He also finds out that Rei Ayanami is a clone of his mother, and also has parts of herself in his Evangelion. Shinji and Kaworu, the First Angel, pilot Evangelion into the Terminal Dogma and release the spear from Lilith, causing her to disintegrate into LCL. This sets the stage for Fourth Impact, but it is luckily avoided and stopped when Kaworu kills himself. Asuka and Rei retrieve Shinji and take him away.

How to remake a masterwork as a mediocre film. Something like that could be applied to describe the third film in the "Rebuild of Evangelion" film series, "Evangelion 3.0: You Can (Not) Redo". Even though the previous film, "Evangelion 2.22", came as a very pleasant surprise and offered new hope for the new film series, this represents a debase of a talent: "3.0" seems as if Hideaki Anno decided to write a fancfiction - or a rip-off - of his own work. The whole story is so extremely weird and estranged from the characters of the brilliant original anime series that it simply isn't "Evangelion" anymore. It is a counterfeit. There are by this point too many versions of the franchise, which only seem to continue for profit, not creativity. What was the point of having Shinji awaken 14 years after the previous film, in the year 2029? This way, it seems as if they skipped a whole era of the narrative. Furthermore, it seems unconvicing that all the Human Intrumentality Project would just wait all that time for Shinji to activate itself again. A few good lines of wisdom ("It is easy to destroy the world. But it is difficult to repair it."), the opening action sequence in which Evangelions are in Earth's orbit and sly parallels between the situation of Shinji and his father Gendo (Shinji tried to save Rei Ayanami, but unintentionally triggered a catastrophe, just like Gendo is trying to revive Yui Ayanami by playing with the potentially catastrophic Human Instrumentality Project) help somewhat alleviate the downside of the film, but they are not enough to compensate for the mess of an ultra-depressive story with several confusing moments. Even the original anime was confusing, yet managed to somehow integrate it into a deeper image of psychoanalysis and symbolism where the Angels act as Shinji's unexplained fears and anxiety, and thus need to be conquered in order for him to achieve a normal, balanced personality. But here, on its own, "3.0." does not manage to get to that part, thereby leaving all the burden on the fourth and final film.