Welcome, or No Trespassing 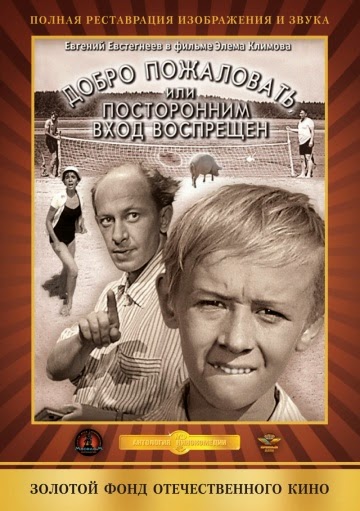 In a Soviet Pioneer camp, kids are told that they have all the rights and all the decisions, but in reality, everything there is controlled by the strict supervisor Dynin. One of the kids, Inochkin, is especially refusing to yield to all the rules and simply wants to have fun. He swims to an island, which was forbidden, and is thus expelled from the camp, but secretly returns. He persuades kids to go into a field of nettles in order to feign a pandemic and thus stop annoying family members from visiting the camp, whic would reveal that he is expelled, but Dynin sees through their plan. During a parade, all the kids abandon the show and go to swim in the river, while Dynin is left alone.

The 1st out of only five feature length films he directed, Elem Klimov's "Welcome, or No Trespassing" is one of the grand satires of the 20th century: only he could have modelled a "Dennis the Menace" kind of children's storyline into a gigantic allegory on the Bolshevik dictatorship, even in the visionary end predicting the collapse of the Soviet Union. From the opening "teaser" sequence - which says that "this is a film for grown ups. And for kids, because they will all one day be grown ups, as well!" - and the establishing shots of the children's camp where the main supervisor Dynin gives a Lenin-like speech in which he tells to all the kids that "they have all the rights here and take all the decisions", one can sense the camp is a sly and humorous allegory of the Soviet society. The main hero, Inochkin, is not just a rebellious kid, but a symbol for suppressed individuals who long for a free reign, and for re-questioning some pointless rules and restrictions. By setting the story in an innocent, kids' world, a genius charge was achieved; numerous "suspicious" scenes also seemingly 'taunt' the regime, and thus even a harmless moment where Inochkin ripped through the net of the swimming area and went to an island, which was forbidden, may or may not hold a deeper meaning, thus exonerating the author. Klimov already here demonstrated a sense for engaging visual style, stemming from the character's movements or shot compositions. which helps in the second, rather dry and less inspired half which contained a couple of empty moments. Overall, though, this is a successful satire, and the sequence where Inochkin imagines he is "flying/jumping" over the river may have even inspired Takrovsky to imitate it in his opening sequence for "Andrei Rublyov".