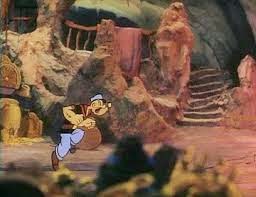 Popeye, Olive and Wimpy are relaxing at the beach when they hear of the 40 thieves led by Abu Hassan. The trio flies to the Middle East to confront them, but their plane crashes in a desert. Luckily, they manage to reach a city in an oasis, but just then Hassan and his 40 thieves start a raid of the place. They kidnap Olive and Wimpy, but Popeye follows them into their cave and manages to beat them up thanks to his spinach.

The 2nd out of three Technicolor Popeye adaptations from the Fleischer Studios, "Popeye the Sailor Meets Ali Baba's 40 Thieves" is a remarkable, opulent and vibrant animated short that features a stimulating blend of animation and live action sequences, as well as a very interesting early use of colors. Overshadowed by Disney's classic "Snow White and the Seven Dwarfs", "40Thieves" still holds up surprisingly well today and does not seem to have lost any ground at any field compared to modern animated achievements: just like he proved later with "Gulliver's Travels", director Dave Fleischer has a natural sense for creating a fun and clever cartoon, demonstrating it again here in the form of an engaging, accessible, but also highly energetic and inspiring narrative that features numerous catchy jokes (Popeye and Olive cannot read an Arabic menu, so the waiter simply folds the paper and "creates" a Latin script; the 40 thieves plunder everything to such an extent that they even steal a sausage from Wimpy's fork; the almost meticulously choreographed fight between Popeye and the 40 thieves), some of which even border on experimental film, delivering - together with "Popeye and Sindbad", released a year earlier - arguably the best animated version of Popeye, a one that stayed faithful to his comic persona and vitality.