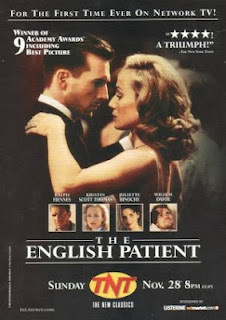 In an Italian monastery at the end of World War II, nurse Hana is taking care of an unknown man, nicknamed "The English Patient", who was severely burned after his plane crashed. The monastery is also inhabited by Caravaggio and Kip, a Sikh bomb defuser for the British Army. The patient slowly remembers his history: he is Laszlo Almásy and he mapped the Sahara for the Royal Geographical Society. He had an affair with Katherine Clifton, wife of Geoffrey. As a revenge, Geoffrey crashes his plane together with Katherine in it in the desert. Laszlo leaves her wounded in a cave and rushes across the desert to get help. However, the British don't believe him and arrest him, thinking he is a German spy. Laszlo escapes but returns too late: Katherine died in the cave.

There is a, today already a legendary "Seinfeld" episode where Elaine goes to see "The English Patient" at the cinema and hates it, but finds herself an outcast in that category since all of her friends love the film. It illustrated an interesting trend since the movie caused a bipolar reaction in some critics, including even Arsen Oremović who famously called it only "watchable". Truly, from today's perspective it is peculiar to find out that in 1996, the year where "Breaking the Waves", "Jerry Maguire", "Secrets and Lies" and (overrated, but also better) "Fargo" were released, the Oscar, Golden Globe and BAFTA for best film went to the "Patient", a fine, smooth, sometimes poetic, but schematic, overlong, largely calculative achievement with bland dialogues. It is a good film after all, but it cannot be considered great since it simply does not meet the criteria for such a category. One of its major problems is the uneven mood, with several outbursts of strange scenes (the disturbing interrogation sequence where soldiers cut off Caravaggio's finger).

The 3 hour story has some great details (Laszlo and Katherine take a spade and dig up a car covered by sand in the desert; Santa Claus cheering up British soldiers in Egypt; Geoffrey folding a paper four times, extracting a shape of a heart in the middle and then unfolding it to get four hearts while waiting for his wife who is having an affair) and aesthetic cinematography, yet it is still grey, the romance is not that powerful - reviewer Jeffrey Overstreet sharply observed how "can we cheer for heroes who sell out their friends and nation for an extramarital affair?" - and many shots seem forced and boring, almost reaching the level of an artistic placebo at times. Ironically, despite excellent actors, Laszlo and Katherine never seem truly alive (except in the end), which is why the supporting character of Hana (brilliant Juliette Binoche, who won several awards) and her romance with Kip, a bomb defuser, even overshadows the main plot. The only time when the main protagonists truly "sink in" is at the powerful tragic ending, where Katherine has to stay wounded in the cave, while Laszlo is rushing across the desert to find help before she dies. This is the moment that gives their affair weight, except that it is entirely unrealistic that every British soldier would simply ignore Laszlo's cry for help - seriously, you cannot offer such bad writing, even in such contrived plot points the writers should have tried to camouflage that 'plot device' more adequately.