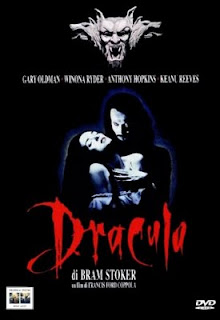 In 1453, the Ottoman Empire conquers Constantinople and storms Europe. Romanian count Vlad Tepes stops them, but the Ottoman soldiers sent his wife Elizabeth a fake message that he died in combat. Devastated, she committed suicide. When Vlad finds that out, he sells his soul to demons and becomes Dracula. In 1897, he traps real estate seller Jonathan in his castle and goes to London to meet his fiance Mina, who looks remarkably like Elizabeth. Jonathan calls Van Hellsing for help. Dracula dies in his castle, but Mina gains affection towards him.

The last great film by Francis Ford Coppola - and his first excellent achievement 13 years after "Apocalypse Now" - elite horror "Dracula" is such a virtuoso directed film that the director should have received another Oscar nod (though he won a Saturn Award for best director and film), and determining what is more fascinating - imaginative camera angles, panorama or the set design solutions, all bordering expressionistic works of Murnau and Lang - is impossible. From the sole exposition after the fall of Constantinople in 1453 where count Vlad is fighting with the Ottoman soldiers (all shown just in shadowy silhouettes), the movie manifests brilliant visual style, yet the main (anti) hero is not presented as the typical black-and-white bad guy, but as a disappointed romantic. All actors did a great job, with Winona Ryder and Anthony Hopkins standing out the most. The story is filled with opulent-bizarre scenes: Vlad has a transcendent vision of Elizabeth's face on the sky; vampire women "emerge" from Jonathan's bed; a werewolf has intercourse with Lucy; Dracula takes Mina's tears and makes diamonds out of them - whereas the mood is wonderfully aesthetic and exciting, sharp and tight, scary but at the same time done with taste, which is why this is an very stimulative movie.