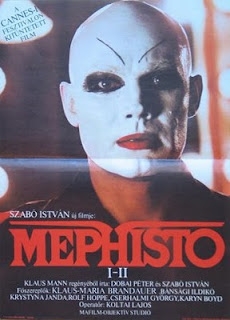 Germany, just a few months before the Nazi dictatorship takes over. Hendrik Höfgen is a liberal actor who plays in a theater in Hamburg, has a relationship with the African-German Julietta even after he married Barbara, but is unhappy with his life because he feels like a "provincial actor". He is happy when he gets an opportunity to star in a big theater in Berlin, but Barbara leaves the country after the Nazi party wins the election. Hendrik goes to Austria, but returns back to Berlin after an invitation by actress Lotte Lindenthal, who has a relationship with a Nazi general. Slowly, Hendrik becomes a member of the Nazi party, and thereby gets a "boost" in his career: he becomes the director of the theater and plays the role of Mephisto.

Winner of several awards, Istvan Szabo's "Mephisto", a serious adaptation of the satirical opportunistic novel of the same title by Klaus Mann, is an overlong, but honest, straightforward and 'good old school' type of film-making carrying the Faustian theme of the main protagonist, actor Hendrik, who "sells his soul" and becomes a member of the Nazi party in order to assure his career success, with a genius ironic double twist being that he also plays Mephisto in the theater. Despite the competent directing, the movie wouldn't have been half as good without the main actor, brilliant Klaus Maria Brandauer playing the incredibly energetic actor Hendrik as a Kinski-like character - in one scene, he is exercising-dancing in tights together with his mistress Juliette, until they land in bed and he takes off her clothes as they both humorously scrabble and giggle; in another, he is trying to charm the influential actress Lindenthal. As they say goodbye, she walks away to her backyard, and he thinks: "If she at least turns around now, it would be success. If she waves, it's a triumph". And just a few steps before the door, she turns around and waves at him, making him smile. Even though the film's message is obvious, it still speaks cleverly about conformity and opportunism.