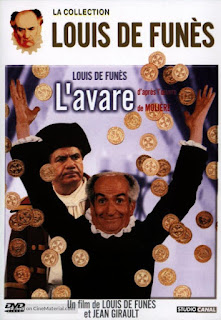 Harpagon is a magnificent cheapskate, a person who accumulated 10,000 golden coins in a treasure chest, which he buried in his garden. Despite this fortune, he still watches how to save every penny among his servants, and even plans to marry a young girl, Marianne, for money, even though his son, Cleante, is in love with her. He also wants his daughter Elise and Cleante to marry old, but rich people in order to also inherit a lot of money. Harpagon is such a miser that he even orders his cook to make a diner without money for Marianne and her mother, and gets uncritical support from his servant Valere, who only wants to appease him to propose Elise. In order to finally end this charade, Cleante finds and steals the treasure chest and presses Harpagon to allow Elise and Cleante to marry whom they want. Harpagon accepts and gets his money back, while Valere turns out to be the child of a nobleman, and thus proposes Elise.

Louis de Funes' feature length directorial debut and his second penultimate film, "The Miser" is an almost identical adaptation of Moliere's chef-d'œuvre comic play "L'avare", where about 90% of all events and dialogues were taken from it, and can thus be considered successful. The level of absurdity revolving around the theme of greed reaching comic proportions are very fun, and thus those who did not read Moliere's grand literary satire will enjoy it, since de Funes is brilliantly picked as the embodiment of a cheapskate and a slave of money: it is rare to have a film where de Funes' immense antics are actually given a run for their money and topped by even more hilarious dialogues. Fast, dynamic, very correct, balanced, clever, benign, wonderfully simple and magnificently comical, "The Miser" gives a great visual case study on greed and excessive behavior of it, exploiting the premise to the maximum.

Already in the opening act, where the protagonist Harpagon is praying on the bench in church, but "discretely" moves away to the other side as soon as the church assistant shows up to pick up donations, the movie instantly sets up a witty premise, and just continues to grow exponentially with insane dialogues: Harpagon attacks his son for dressing too expensively, lamenting how his wardrobe would be "enough for a pension"; the cook giving a marathon collection of rumors to Harpagon ("The people say the darnedest stories about your cheapskate nature. One said that you published calendars with double Easter and Assumption of Mary days so that your servants would fast twice as long! Other said that you sued the neighbor because his cat used your garden without paying. Another one said you were caught at night stealing porridge from your own horse!") or when Harpagon orders his daughter to marry a 50-year old man because the latter "has no kids and thus they won't withdraw money from him". Occasionally, it is weird that Harpagon looks into the camera while talking to himself, trying to adapt Moliere's frequent monologues to the screen, yet even that can be seen as 'breaking-the-fourth-wall'.