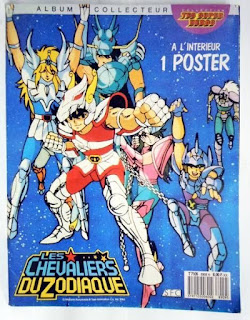 Seiya is a teenage orphan who has trained ever since he was a kid by Marin to become a Saint, a warrior with special powers who will protect Kaori, who is the embodiment of the Goddess of Athena. By defeating others in a match in Greece, Seiya manages to obtain the Pegasus cloth, and thus qualifies to participate in a match involving other Saints who all compete to get an even higher cloth, the Gold cloth. He makes friend with other Saints - Dragon Shiryu, Andromeda Shun, Cygnus Hyouga and even Shun's brother, Phoenix Ikki, who almost became evil. The match is interrupted, however, when parts of the Gold cloth are stolen by the minions of Arles, the new, corrupt governor of the Sanctuary, who wants to rule the world. The Saints thus fight him.

Once one of the most popular anime shows from the 80s, that was even awarded the 1st place in the Animage magazine, hyped "Saint Seiya" lost a lot of its initial charm today and was corroded by time since it spent too much energy on generic action and too little on characters or the much more appealing mysticism surrounding its background based on Greek mythology. There are a lot of problems when one show starts four times (first when Seiya fights to get the Pegasus cloth; second when Pegasus Seiya fights in the tournament match; third when the Saints need to convert Ikki to the good side; fourth when they search for the stolen Gold cloth) and when it stacks a lot of illogical moments or inconsistencies (Why are the teenage protagonists fighting to get the Gold cloth when they do not even know what it is? Why were they sent to train for almost a decade on desolate places around the world, instead of just training together, as friends, in proximity, to keep contact? Why didn't human rights NGOs intervene for child abuse?), as well as containing the good side, the Graude Foundation, that is so shady and has such questionable methods that one almost wonders if they are evil as well - this is especially obvious in the misguided premise in which orphans are taken away by this organization and taught to train to fight since the age of 10, which reminds too much of child soldier recruitment.

"Saint Seiya" was initially presented as a 'soft' version of "Fist of the North Star", yet unfortunately underwent a "Dragonball-ization" fairly quickly and proved that it is basically just a "fightorama" anime for the testosterone charged viewers who get a thrill out of endless battles between the warriors of good and evil, with several brutal moments which are strangely bloody (especially episodes 28 and 31). No matter how great action sequences are, they can only go so far - and the action sequences are not that great here in the first place, anyway. While Seiya seems sympathetic, he - and every other character - is only shown fighting, and thus remained one-dimensional, without charm, wit, humor or any versatile emotional development. That is why the protagonists' loyalty never seems genuine, since they are not shown doing anything together privately to bond. By narrowing the storyline down to only battle and fight clashes, which are always predictable (a bad guy boasts how the puny Seiya can never defeat him - and then Seiya defeats him), "Saint Seiya's" narrative range remained thin, bland and monotone. And suitable for never ending array of shallow battles, with such silly scenes as Hyouga fighting polar bears or Shiryu kicking a waterfall until it flows upwards. The only interesting battle technique was presented with Andromeda Shun, who allows his sentient, very long chain to make a circle around him on the floor, and then waits to stab the enemy as soon as he steps into this area. It is too little for a great moment to compensate for 10 insipid episodes, but the first 4 arcs of "Saint Seiya" have two truly magical, enchanting moments that stand out precisely because they are superior to the rest of the average events. Actually, they are so great one almost feels sadness that they were not in a better story, since they are precious. One is episode 26, when one bad guy was defeated, but Athena starts to glow, approaches him and forgives him, and he has a blissful expression on his face before dying, almost as if he found his inner peace. The other is in episode 13, when Dragon Shiryu is wounded, but decides to risk his life fighting Black Dragon warrior in order to protect friend Seiya. After the battle, Shiryu is bleeding, slowly dying, but then Black Dragon shows up - and instead of finishing him off, he actually uses his hand to heal him, and die instead - with his final words being: "... I also want to believe... in your so-called friendship!" This has such pathos that it is even comparable to the finale in "Blade Runner" - but alas, it remained in minority in this storyline.