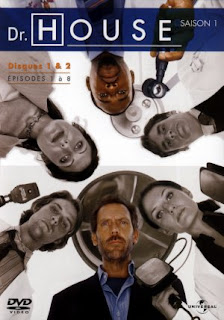 Dr. Gregory House is a bitter, but brilliant doctor at the Princeton-Plainsboro hospital in New Jersey. His assistants are doctors Eric Foreman, Robert Chase and Allison Cameron, whereas oncologist Wilson is his only friend who moves to his place after separating from his wife. Under the supervision of the hospital boss, Dr. Lisa Cuddy, House is assigned to the most bizarre, surreal medical cases that leave all other doctors without an answer - except for him. He also gets into a quandary after his ex-girlfriend, Stacy, briefly shows up to ask help for her husband. At the end of season 2, House is shot and wounded by a former patient.

In 2004, David Shore created "House, MD", which would soon make a progress into one of the most hyped and acclaimed TV shows in the 2000s, featuring a phenomenal role for the brilliant actor Hugh Laurie. However, the first two seasons where not House's finest hour. It is evident the authors were still adjusting and finding their own ground while creating the storyline: some of the episodes were too melodramatic (the pretentious, bloated symbolism in which the new born baby comes to life while his mother dies simultaneously in episode 1.18, for instance), while others were too explicit in some extreme medical diseases (in episode 2.24, a man's swollen tongue bloats to such a proportion that it squeezes out his right eye and causes it to fall out, and later causes his scrotum to explode from blood), some of which are so tasteless they are more suitable for a horror movie, and thus drop the overall quality of the two seasons by a notch. Unfortunately, the dialogues are also not as inspired as it will be in later seasons, and alas, cannot compensate for these flaws. Some of the lines are fantastic and give the typical "House" style of charm, yet they should have been at a double or even triple rate compared to the conventional disalogues in order to salvage them. However, when they get there, the writers truly hand over some delicious lines, whether it is between House and Wilson ("Mom won't give her consent yet." - "Godot would be faster"; "Did your pager just go off or are you simply trying to dodge this conversation?" - "Why can't both be true?"), House and a guest character ("Is it true what they say about Jewish foreplay?" - "Two hours of begging?" - "I heard four." - "I'm only half-Jewish") or House childishly bickering with the husband of his ex-girlfriend, Stacy, who also has her fair share of a juicy comment ("This is like watching Oscar Wilde and Noel Coward in the 3rd grade"). Despite the unsure, shaky path the show had in the first two seasons, equipped with a few empty walks, it also proved it has outbursts of greatness hidden in there, such as a couple of multi-layered episodes, like in episode 1.21, "Three Stories", where the 'unreliable narrator' method gave a very clever plot twist.