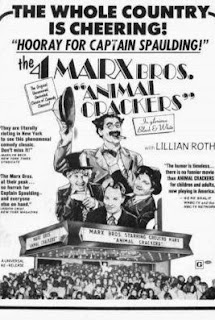 Explorer Jeffrey T. Spaulding returns from an expedition in Africa back to the US. In order to commemorate his return, Mrs. Rittenhouse organizes a party at her mansion and plans to unveil a famous painting worth 100,000 $. Two other weird guests show up, Ravelli and his mute friend. Horatio and Arabella plan to switch the painting with a copy, but it gets stolen. The police finds the painting, while the rich Chandler hires Horatio impressed by his painting skills.

"Animal Crackers" is the 2nd best feature length comedy in the careers of the Marx brothers, right after their phenomenal "Duck Soup": here they are given a free hand to be in their element, the anarchic-burlesque humor, and manage to create such a frequency of brilliant jokes that they bring down the house. The vague plot is once again just an excuse to have something Groucho and the gang can lean on to, whereas a few musical scenes tend to seem slightly unnecessary (for instance, the overlong scene of Harpo playing a harp), but the highlights overshadow all these complaints with ease since the sheer number of inspired jokes is staggering, and even their fillers are funny. The most is once again achieved from unheard off comical dialogues and wise-cracking comments ("You're the most beautiful woman I've ever seen, which doesn't say much for you."; "How much are you paid to play?" - "10 $ per hour," - "And how much are you paid not to play?" - "12 $ per hour." - "How much would you charge to run into an open manhole?"; Spaulding says: "I'm Jeffrey T. Spaulding. Do you know what the "T." stands for?" Chandler leans closer towards him and says: "Thomas?" - "No. Edgar. But you were close. In fact, you still are"; when Chico and Harpo start fighting, Groucho goes: "They are going to exterminate each other. That's the best thing that could happen to either of them.") as well as a few of weird slapstick stunts (Harpo's habit of constantly putting his leg on someone's hand). Very few absurd comedies manage to get it right, to align into a harmonius whole that simply makes the viewers want to forgive them whatever they do, and this is one of them.