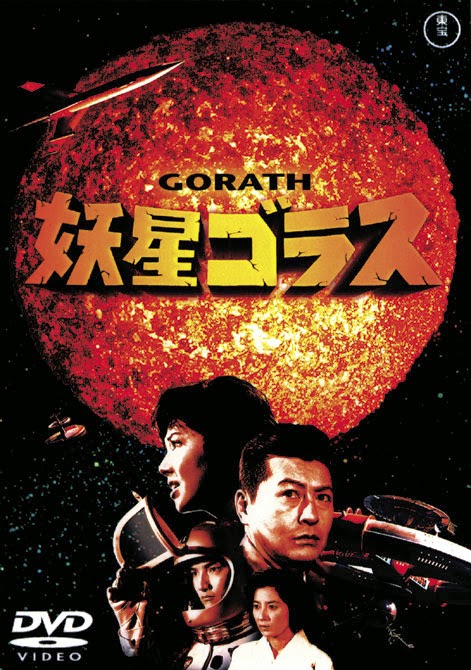 In the futuristic 1980s, a spaceship discovers a strange star, Gorath, 6,000 times more massive than Earth, entering the Solar system. According to calculations, it is heading towards Earth. In order to save mankind, a Japanese scientist proposes a daring project at the UN: to "move" the Earth away from Gorath's path. In order to achieve that, scientists build hundreds of thrusters with a combined energy of 6,6 billion megatons on the South Pole, which will lift the planet upwards. While observing the Gorath, pilot Kanai loses his consciousness in the spaceship. The thrusters work and dodge Earth from Gorath, which continues its path in the outer space.

Silly and dumb, SF-extravaganza "Gorath" is closer to trash than to a serious disaster film, but a certain spark is delivered by the interesting story about Gorath, a Nibiru-like star on a collision course with Earth. The effects on the people, their reactions and efforts to change the fate of the planet, are surprisingly underwhelming, partly because the faceless characters are all bland and without any charm or wit - which ultimately makes them all just a 'face in the crowd' - and partly due to the film's cheap budget and low level of special effects: you cannot expect scale and epic proportions when miniature toy spaceships and toy bulldozers are suppose to pretend to be the real thing. Ironically, just as the plastic space stations, which are so light that they seem as if that they could be blown away by the slightest breeze any minute, the movie itself is without weight. The 5-minute subplot featuring a giant walrus (!) awakened on the South Pole is probably the most ludicrous ingredient of the film. Still, despite his budget limitations, director Ishiro Honda has a certain enthusiasm and refuses to give up, which should be welcomed. If anything, "Gorath" has at least two ontological scenes near the end: the one is when people watch the Moon getting sucked into Gorath in the sky, and the other is when Gorath rips Saturn's rings apart while passing it. The latter scene reveals that the movie inspired Matusmoto's superior and very similar "Queen Millennia" released 19 years later, and which also features an almost identical moment when planet La Metalle rips Saturn's rings. Almost as a whim of fate, "Gorath" was there first, but its imitator, "Millennia", was better on all other levels.