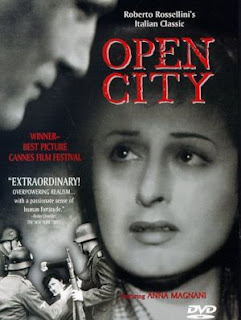 Rome towards the end of World War II. Giorgio and Franscesco are two resistance fighters who constantly have to hide from fascist raids of apartments. Don Pietro, a clumsy but good natured priest, helps the resistance by smuggling messages for them. Franscesco is engaged to Pina, a widow with a little boy. When the fascists arrest Francesco during a raid, Pina gets shot for interfering. Marina betrays the remaining members of the resistance for money. Fascists torture Giorgio until death. Don Pietro gets shot in a firing squad for not wanting to give information about the resistance plans.

Winner of the Golden Palm in Cannes, the New York Film critics Circle Award for best foreign language film, and nominated for an Oscar for best screenplay, "Rome, Open City" went down in history of cinema as one of the first, if not the first example of Italian neorealism (experts also cite "Ossessione" as one of the possible forerunners to that direction), surprising the audience in those times with honest, unglamourous, "un-Hollywood" depiction of ordinary people coping with a tough, dirty life: with this film, director Roberto Rossellini also started his 'war trilogy'. "Rome" flows well and is a quality piece of art, but still seems to be an underdeveloped forerunner to Rossellini's future and better films "Germany: Year Zero" and "Paisa" - for instance, in the first half of the story, the viewers truly make a connection only with one character in it, the clumsy but lovable priest Don Pietro, in the scene where he is in a shop but cannot help not to turn the statue of a saint away from the "view" of a nude sculpture. Other actors and their characters are also good, but simply not that engaging. Rossellini concentrated his talent only in the last third of the film when it reaches huge intensity during the torture sequence of the fascists where so little is shown, but everything is said on the terrified expression of Don Pietro's face, yet despite an ambitious tone that deserves recommendation, the movie as a whole does tend to turn rather melodramatic at times.