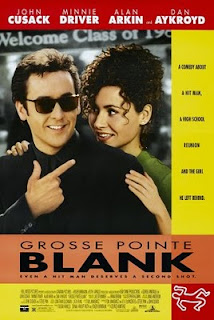 Martin Q. Blank is a hired assassin who together with his secretary has a rather profitable enterprise, until he gets a call to join the 10 year high school reunion. He thus returns to his home town, Grosse Pointe, where he meets his ex-girlfriend Debi, whom he left without explanation on prom night to join the army. She is now a local D.J. and puts him on air in her studio, which causes a feeling of shame in him. The problem is that his rival Grocer already set two NSA agents to kill him as soon as he does his assignment of assassinating someone there. Still, Martin and Debi go to the reunion and discovers he is suppose to kill her father. Martin refuses and finishes Grocer off, quitting his job and drives off with Debi.

Excellent black comedy by George Armitage, "Grosse Pointe Blank" is a real little treat. It's a pity that some critics were unjustifiably not inclined towards it because it does neither go overboard with the black tone nor does it exaggerate with its characters which it treats in a surprisingly serious and humane way, much more honest and unpretentious than many other films that blend comedy and crime. Laconic direction, dynamic rhythm and amazing soundtrack from all sides are main catalysts of good mood throughout, together with the classic doubts about high school reunions. "Grosse Pointe Blank" found a great little honorary role for comedian Dan Aykroyd as the bad guy Grocer, yet the main two protagonists are the main highlights: John Cusack does a very good job and only occasionally "slips" into hamming around as assassin Martin who is cold at first, but at the same time can be magical and charming, whereas the charming Minnie Driver is wonderfully energetic as DJ Debi, his ex-girlfriend. The sequence where Martin shows up in his home town after he left her 10 years ago without explanation on prom night, is a blast: Debi instantly recognizes him when he enters her Radio studio and kisses him, whereas the magical song "Pressure Drop" by The Specials perfectly catches the vibe of the moment. He then again leaves, exiting the building, but she turns on her microphone and says, on air, that a "long lost acquittance suddenly came back to her, but is now again leaving from her life", which causes him to return from the street back into her studio. An amazing piece of writing. Despite being very simple, this is one of the most shrill off-beat films of 1997.